Switch to the dark mode that's kinder on your eyes at night time.

Switch to the light mode that's kinder on your eyes at day time.

Switch to the dark mode that's kinder on your eyes at night time.

Switch to the light mode that's kinder on your eyes at day time.

The Cane Corso is a working dog who thrives on having a job. This ancient Italian dog breed was created to protect property and hunt large game such as wild boar. Although these are purebred dogs, you may find them in the care of rescue organizations or shelters.

A dedicated friend and a necessary helper in the household

The Cane Corso is an animal characterized by a truly noble and elegant appearance, although for many centuries its duties included the most necessary and difficult duties – protecting peasant property, grazing pets, tracking owners during hunting, helping to drive wild boars and other large beasts. Often these dogs went into dog fights, and the stakes of the fighters were very high. They also followed the army during long military campaigns.

What’s interesting: The Cane Corso was distributed mainly among peasant families, where the dog was required to have purely work qualities. But the noble people did not particularly favor this unrecognized breed but kept fashion pets.

As the era of urban construction began, the race was rapidly losing its privileges as unnecessary. But some Italian breeders realized it in time when the breeds were extinct. They have traveled to those areas of the country where Cane Corso was most in demand, they selected the most typical individuals. Not only did they succeed in reviving the dying breed, but they also managed to ensure that these dogs were officially recognized as a separate existing breed.

All the descriptions of the dogs, both written and in the form of paintings or statues, show that the appearance of these unique dogs has not changed over the centuries. Probably the reason for this is that the animal had to serve a person in many areas, and beauty was not the presence of essential characteristics.

How to Identify a Cane Corso Among Other Dogs

Based on the historical archives, we can conclude that these dogs always had a fairly simple appearance, they were strong, powerful, but quite neat and stylish. Such made them daily hard work and constant active movements. The dogs did not have time to rest, guarding the property of the owners or other domestic animals, following the hunters or warriors.

Despite a mobile lifestyle, a dog can have a maximum weight of up to 100 kg, but this is due to its rather high physical size. Cane Corson muscles are loud, embossed muscles. The case has a special stretched shape, which is characterized by a longer length than the withers. 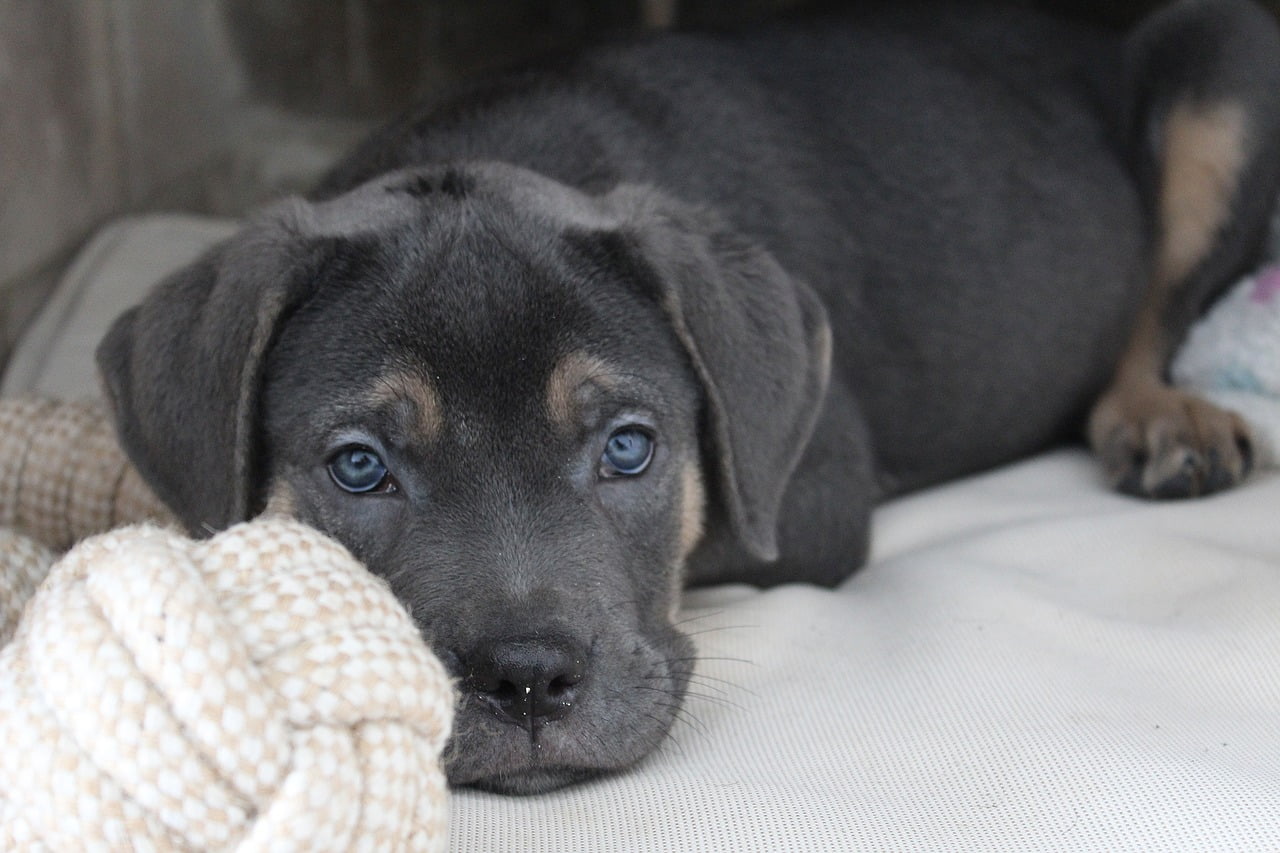 Gender differences in the race:

The color of this breed can be black, as well as gray, red, and its various shades are included here, and the tiger. White marks are possible but on the chest and limbs. There are also such conditions: if the color does not match black or gray, there is a mask on the face whose color exactly matches these colors. The eyes should also be closed, but the color should not exceed their level.

In this breed, the color of the coat is slight with a hue of blue.

As regards the definition of standards, since the official rules for determining the breed were recently adopted, its descriptions are gradually being formed. Therefore, this breed includes several different types of dogs. And expert disputes over certain features of appearance, especially during exhibitions, continue. Examples of controversy include:

Suggestions that dogs of the same color be registered at dog shows in separate rings are based on the fact that black representatives are closer to the dog outside, gray ones resemble casinos, and tiger species very much resemble breeds such as the Staffordshire Terrier and boxer.

Many people are attracted to this race primarily by beauty, strength, power, energy, and invincible expression. Walking proudly during the walk, the owner always knows that the eyes of passers-by were certainly riveted to the Cane Corso. With such a dog, it is not scary to walk down a dark street and leave it to guard the property.

But still, don’t forget that these animals did not live for centuries in comfortable home conditions, but performed their difficult service by guarding, defending, attacking, and, if necessary, killing the enemy. Therefore, novice breeders or those accustomed to ornamental dogs must take a short course after researching the characteristics of this breed in order not to be confused in an unexpected situation. For example, once there was a real case. The family left town, taking a one-year-old pet who first got into such an open space and rushed hard around the field. Suddenly, behind the turn, several goats appeared, which were driven to this place daily.

Of course, the dog rushed towards them. The situation looked very sad because the ancestors of Cane Corson were excellent wild boar hunters, and it was not difficult for the young dog to meet the goats. In addition, some people wanted to protect their animals, but this time the shepherd’s instinct was talking about the dog. Skillfully sheds goats together that were otherwise not afraid. The huge but contented pet guarded the animals for a while, ran around, and carefully monitored the environment.

But such stories don’t always end well because the dog doesn’t always show kindness to strangers and animals, especially the smaller ones. Especially if a beloved owner tries to pay attention to another animal, it can suffer enough. Jealousy is inherent in dogs. This breed has such a distinctive feature – it divides the whole world into two categories, that is, the “packaging” that belongs alone, which must be loyal, protect them, and strangers.

And while this dog is smart, balanced in nature, with no increase in aggression, if someone purposefully infiltrates its territory, it can still become uncontrollable. In situations like this, the owner’s teams become useless because the dog in his rage simply doesn’t understand them and behaves exactly as the rudimentary instinct tells him to stop the enemy. When an outsider is in the house, the representative of this race demonstrates by his behavior that, as a faithful guardian, he is ready at any time to give valuable resistance by protecting the area and all members of the family.

The Cane Corso family has everything he has. If a dog is not allowed to communicate with the owners, it can die of longing, so this breed is faithful and faithful. But when he is close, the pet can lie on its feet for a long time, follow, with its full appearance, showing its willingness to obey all orders. But the owner of a Cane Corson must remember that training is not important for the dog to carry out commands, but to fulfill the roles assigned to it by its nature, such as being a protector, a guard.

This breed requires a leader, a leader who can lead, to control, but the owner must avoid an aggressive and rude attitude, otherwise, the dog will experience it painfully.

Cane Corson’s young children are treated very carefully. They give children a lot – to climb for themselves, to push and never hit, they don’t offend the child, but they certainly guard it.

These dogs have a highly developed intuition, so they can react very quickly to the hostility of a stranger or animal, sharing perfectly where the game or real danger is.

Cane Corso, especially at a young age, is very mobile and energetic, so you need to play with him more often, preferably running. If he gets bored at home, he can travel around the apartment, tasting everything in a row. 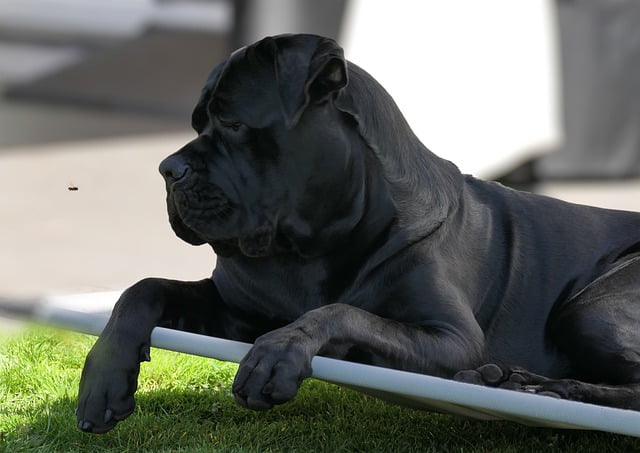 Such pets do not require special care, but owners have to follow several rules and they have become a habit.

The puppy needs a place. At the genetic level, these dogs decided that the confined space is their area. And therefore, if the zone is not fenced in time, the entire space is considered a dog property.

Living in the yard is nice for your pet. However, when the cold comes, it is necessary to either insulate the booth well or take the dog into the house, otherwise, it will not withstand frost. Lowering the temperature in particular is detrimental to puppies.

You have to treat the wool with a stiff brush. The problem with this breed is that the parasites attack the dog’s skin too often because it has a small undercoat.

The ears need to be cleaned, especially if they are cropped, as dirt accumulates much faster.

A small puppy should be fed at least 6 times a day. This continues for up to 5 months. After this period, the meat can be given in a stiffer form, the amount of feeding is reduced to three, but the portions should be increased.

The menu should include foods that contain vitamins, carbohydrates, and proteins. If there are not enough useful substances, the dog is not so mobile and energetic, and its coat dims considerably.

In addition to the meat menu, the dog should eat grains from grains, fruits, and vegetables. You cannot give fish, especially fresh meat to the river, as there is a risk of infecting your pet with parasites that are dangerous to health.

Smoked foods, sweets, and those that are high in carbohydrates are harmful to him. It is very harmful to change your diet dramatically so as not to damage your digestive system. Periodically, the pet needs to prevent parasites on time.

What do you think?

All images are copyrighted to their respective owners. All content cited is derived from their respective sources. Best Cute Animals does not make any warranties about the completeness, reliability and accuracy of this information.

Your password reset link appears to be invalid or expired.

To use social login you have to agree with the storage and handling of your data by this website. %privacy_policy%